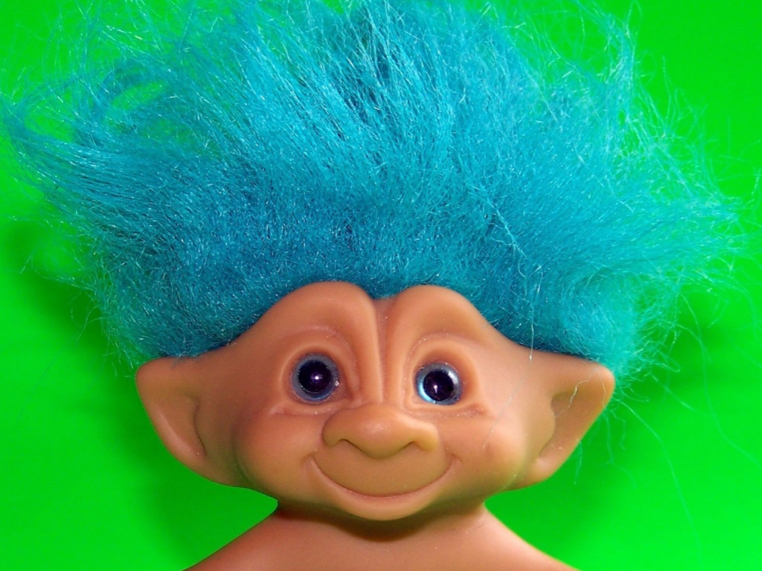 Try to imagine the nastiest, most disgusting online troll that exists.

I see a middle aged man hunched over a keyboard. He’s wearing a freshly pressed shirt his mother has just ironed. His belly is spilling over his pants.

Now I want you to imagine this ugly troll lives within you.

He’s not trolling other people. This troll is hurling nasty comments directly at you – “You’re stupid!”, “You’re lazy” and “You’re going to fail, so why even bother?”

When we say these cruel things to ourselves, we’re effectively trolling ourselves.

We can mistakenly believe that criticising ourselves will motivate us to try harder. To lift our game. To not make the same mistake again. But sadly, it has the opposite effect.

Research by Dr Kristen Neff at the University of Texas at Austin shows that when we judge ourselves harshly this decreases our motivation to study. It makes it harder for us to keep going with that subject we’re struggling with.

So if beating ourselves up doesn’t work, what does?

Do we need to work on our self esteem?

According to Dr Neff focusing on boosting self esteem is problematic. Why? Because it typically relies on comparing yourself to others to feel a sense of superiority. You want to avoid the comparison trap at all costs.

A much better strategy is to practise self compassion.

What is self compassion?

“ . . . self compassion involves being open to and aware of one’s own suffering, offering kindness and understanding to oneself, desiring the self’s well-being, taking a non-judgemental attitude towards one’s inadequacies and failures, and framing one’s own experience in light of the common human experience.”

In the context of learning, research has found that self compassion can help students to bounce back from academic failures. 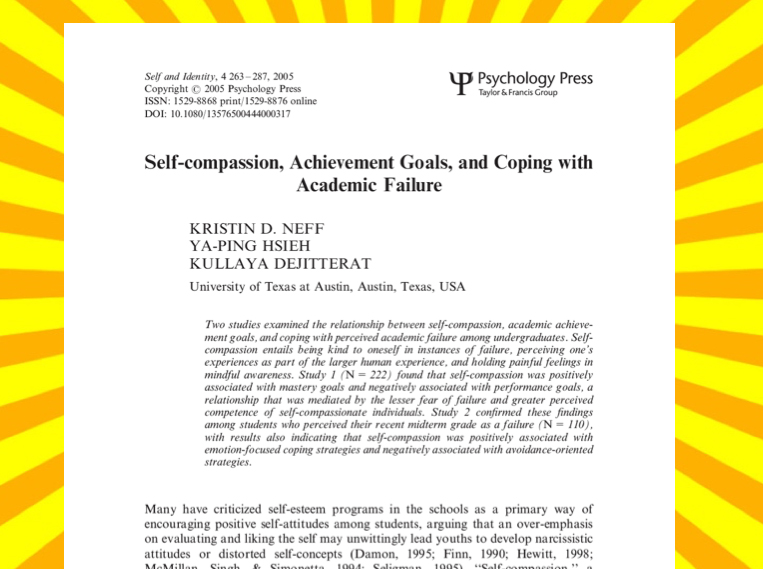 In one study, Neff and her colleagues explored the relationship between self compassion and other psychological factors (e.g. intrinsic motivation) after a perceived academic failure. Here’s what this team of researchers did . . .

They recruited students who were enrolled in difficult university courses (and therefore, were likely to fail or not do well on the exam).

The students received their exam result and a day later they were asked to fill in a self report measure. The researchers then focused on students who related to their exam grade as a failure (i.e. they were highly dissatisfied with their grade).

What did the researchers find?

Self compassionate students were more motivated to keep going after receiving their disappointing exam result.

“Even after receiving a disappointing grade, it seems that self-compassionate individuals were more able to remain interested and involved in the course topic. This may be due to the fact that self-compassionate individuals do not launch into excessive self-blame when they fail or feel isolated and over-identified with their failure – behaviors that are likely to detract from the ability to remain interested in learning for its own sake.”

In addition, other studies have found self compassionate students are less likely to procrastinate. The figure below is from a study called Start today or the very last day? The relationships among self-compassion, motivation, and procrastination. The solid black bar represents the students who scored high in self compassion (note: this difference was statistically significant). 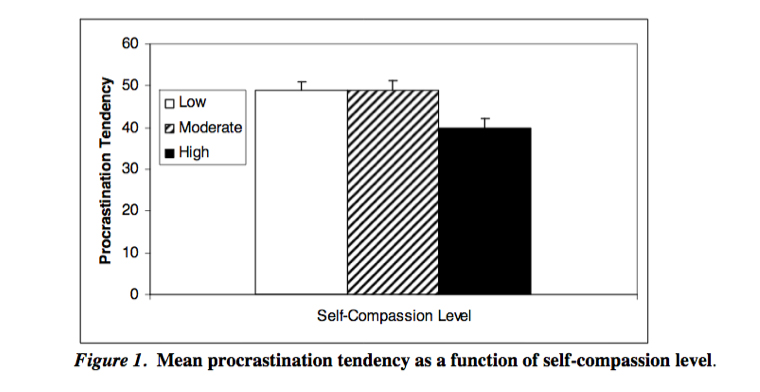 How does self compassion help combat procrastination?

A lot of the time when we procrastinate, it’s not because we’re lazy. It’s because we’re feeling scared. We’re scared of failing and looking stupid.

The thing about self compassionate students is they have less fear of failure. They don’t see failure as an attack on their self worth or identity but as an opportunity to learn and grow. So they tend to just get on with doing what they need to do.

How to practise self compassion

We’re masterful at self-criticism but terrible at saying kind things to ourselves. Rest assured, with a little practise, you can swap the self-trash talk habit for self compassion.

Here are three strategies you can test out:

You’re not the only person who makes mistakes and stuffs up. Everyone bombs out on tests or exams from time to time. We all have bad days.

Who wants to be perfect and do things perfectly anyway? 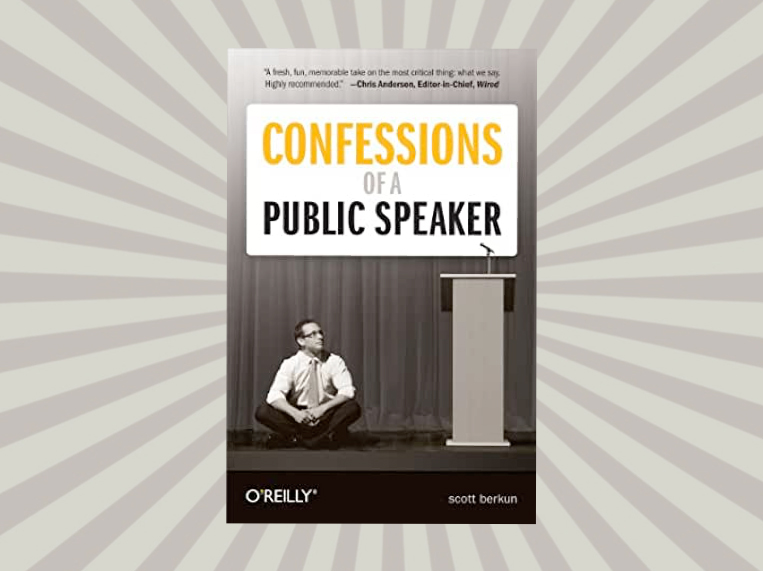 As Scott Berkun says in his book Confessions of a Public Speaker:

“If you’d like to be good at something, the first thing to go out the window is the notion of perfection. Every time I get up to the front of the room, I know I will make mistakes. And this is OK. If you examine how we talk to one another every day, including people giving presentations, you’ll find that even the best speakers make tons of mistakes.”

He goes onto add:

So accept that you’re going to fumble, be clumsy and make A LOT of mistakes. Ultimately, this is how you learn and grow.

In the book Tiny Habits, professor BJ Fogg talks about the importance of celebrating little wins. Every time you engage in a positive behaviour that leads you towards your goals and aspirations, you need to release a positive emotion to wire in that new habit. For instance, you could say “Good job!”, clap your hands or do a little dance.

I’ve found that celebrating tiny successes, such as making my bed and putting on my walking shoes, helps to keep my inner troll in check.

3. What would you say to a friend? 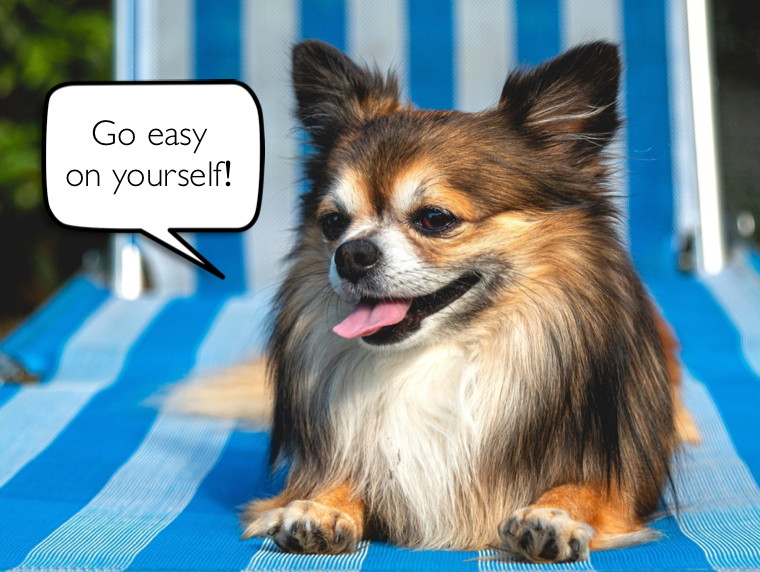 Imagine a kind friend is experiencing your exact same situation. What would you say to them?

Chances are you wouldn’t dare say all these cruel things you’re currently saying to yourself.

Think about what gentle and encouraging words you would text or email to this friend. Write them down. And then read those kind word out to yourself.

Life is hard. Why make things even harder by trolling yourself? In these uncertain times, we need to protect our mental environment. Practising self compassion can strengthen us mentally and help us to keep moving forward.