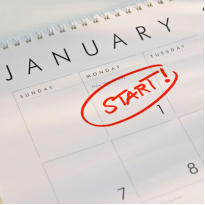 Today, at the start of 2012, many of us will take on adopting healthier habits, but in the next breath, or by tomorrow, or the next week, we will have given up and gone back to our old ways.

A conversation I had with a friend last year nicely illustrates this point. We were discussing the year ahead and he said –

A moment later, he pulled out a cigarette, lit it up and took a puff.

Naturally, some of us have become cynical about new year’s resolutions. “They don’t work” and “Don’t waste your time with them” I hear my friends and family say.

The results were impressive. Over 77% of participants had kept their main resolutions after 1 week, 55% after 1 month and 40% after 6 months.

This study also looked at the factors and strategies people used to stick to their new year’s resolutions and examined the effectiveness of each.

There appeared to be two main factors that predicted people’s success when it came to sticking to their goals. Firstly, people had to be ready to change and take action. Simply having a strong desire to change wasn’t enough. Secondly, they had to believe that they could. Having confidence in their ability to change their behaviour was key.

We can also look to people who have successfully overcome powerful addictions (e.g. alcoholism and smoking) for insights into how to break bad habits and develop healthier ones.

The researcher Glasgow and his team followed over 100 people who were trying to quit smoking. Those that managed to do so, used more positive self-talk than those that failed to quit.

For example, instead of saying positie statements such as “I’ll feel great and be able to breathe more easily”, they’d say “I’ll be a loser if I can’t quit the smokes”. Positive self talk appears to make a huge difference.

“Stimulus control” and “reinforcement management” are other psychobabble terms that are used to explain strategies that can help you to change your behaviour. According to behavioural psychologists, the surrounding environment shapes human behaviour.

In other words, if you have an endless supply of chocolates and lollies in your pantry, then most likely you’re going to eat them and may even develop a sugar addiction. Similarly, if your friends and family always offer you cake and chocolate and even praise you for eating these foods (i.e. reinforcement), then it’s highly likely you’re going to develop some bad habits.

The idea behind stimulus control is really quite simple. Look around and ask yourself “What is triggering me to eat chocolate?” (i.e. what’s the stimulus or trigger of the undesirable behaviour?) It may be the sight of the chocolate on your desk. So then what? Get rid of the chocolate. Throw it in the bin and don’t buy any more. Too easy.

But what about that big Aunt who always force feeds you her chocolates as a way of expressing her love, and gives you boxes of the stuff for Christmas? Well, according to behavioural psychology you need to manage the stimulus and reinforcer, which means Bye Bye Aunty. Stop seeing her.

But if you’re like me and you know you just couldn’t do that, this is where the power of impis come in.

Impis (short for implementation intentions) take the form of “If…then…” statements and allow you to make a desired behaviour automatic. For example, I could set myself the impi of –

If my aunt offers me chocolates, then I will politely say “No thanks”.

The beauty of impis is that they are pre-decisions. This means you have made the decision before the situation arises, so the next time you see your aunt you immediately know what you’ll say and do. “No thanks”.

Here’s the thing, I don’t smoke. I don’t drink alcohol. In fact, I’m pretty fit and healthy but I’m not going to pretend that my life is perfect because it isn’t.

Like most people, I want 2012 to be better than previous years. There’s room for improvement. I know that I spend more time than I would like on the internet. So I’m resolving to cut back on my internet use. No internet before 10:30am. Checking emails only twice a day.

In a nutshell, the research is clear – new year’s resolutions can and do work. Now is as good a time as any to establish some healthier habits for a happier year. So what are you setting out to create for the new year? Let me know by posting a comment below.

5 thoughts on “Think Big in 2012: The Power of New Year’s Resolutions”