Often the thought of taking action to combat climate change can be overwhelming. People frequently tell me that it’s all too hard, they feel helpless and they don’t know where to start.

If experts such as Professor Ross Garnaut and the world’s leading scientists are however correct about climate change, then the next 2 to 3 years are critical. None of us have time to waste.

No longer can we entertain such thoughts as ‘It’s too hard’ or ‘It can’t be done’. All of us need to be in action, doing whatever we can (whether it be using public transport more often, writing to politicians or turning things off at the powerpoint) to reduce our greenhouse gas emissions.

High Schools can do a great deal to reduce their greenhouse gas emissions and indeed, many of them around the world are starting to do so.

South Fremantle Senior High School is a great example of a school that is taking action and aiming to go carbon neutral. Late last year, the school set a goal of a 10% reduction in energy use by the end of June. I recently interviewed the driving force behind this school’s carbon neutral initiative (Project officer, Kathy Anketell) to find out more about the exciting project and how other schools could do the same.

Q. What made the biggest difference to getting this carbon neutral program up and running at your school?

I guess the one answer is an amazing synergy, people meeting and talking together. A germ of an idea translated into a breakfast meeting a day later, more people were invited and the energy and enthusiasm happened immediately. The Principal at the time Dominic Burgio; was the one person who had the capacity to make it happen by employing a Project Officer, but only if others also embraced it.

(I have never worked in a school before and teachers work so hard, making a commitment to going carbon neutral may be beyond teacherâ€™s time availability, so having a Project Officer to do some of the running around really helps. Surprisingly I have become cost neutral, well sort of, in the year that I have been here grants and donations have equaled my salary).

Q. What advice would you give to other schools, students and staff members who want to do something similar at their school?

Find those who share you ideals, have breakfast, form a working group, go around the doubters, get a grant for an audit and then implement the audit suggestions. The main strength of South Fremantle Senior High School’s Carbon Neutral Project is the positive spins offs of working together for a common goal while doing lots of different things. Enjoy yourself while changing your bit of the world.

Q. What have been the biggest challenges you have faced with this initiative?

Wading through the bureaucracy, lots of good ideas get lost due people running out of time or enthusiasm as â€˜the systemâ€™ stalls. Getting money to implement.

Q. Did South Fremantle high meet its 10% reduction in energy use by the end of June?

No, we have implemented 8 greenhouse reduction measures; however 2 important initiatives have not progressed as quickly as I had hoped. One is the replacement of eclectic storage hot water systems with solar HWS. This was due to the change of Federal Government, the $50,000 for all schools in Australia had the criteria expanded, however this took until July this year. The second initiative was replacing lights throughout the school; this will save 50% of our lighting consumption.

Below is a mindmap (click on it to enlarge) of all the things your school can do to decrease its emissions like South Fremantle Senior High School have done. Implementing the energy savings strategies listed on the mindmap will take a team, patience and commitment, but as Kathy said it can be an enjoyable experience with various positive spin offs. 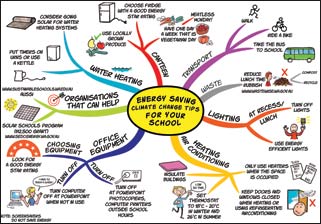 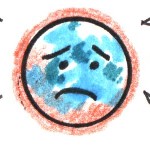 8 thoughts on “What schools can do about climate change”