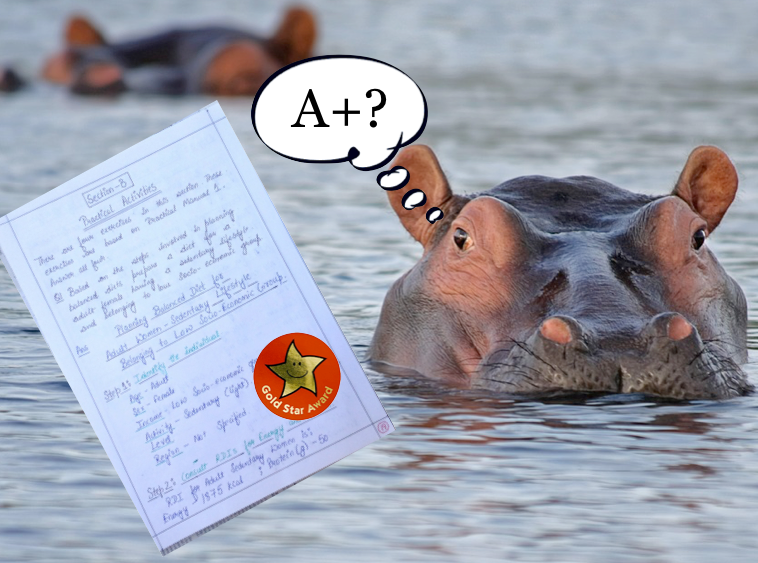 Have you ever spent time with a four-year-old child? Four-year-old children have a natural curiosity about the world. They ask Why? a lot. They’re genuinely interested in learning and discovering how things work.

But at some point that natural curiosity and love of learning is crushed out of them and replaced with an obsession with grades.

Why should you stop obsessing about your grades?

Because it sucks the joy out of life and learning.

Being obsessed with grades will make you feel miserable. How do I know? From personal experience.

At the beginning of year 9, I set myself a goal: to get straight A grades. I thought, “If I get really good grades, then life will be great. I’ll be happy”. Straight A’s was my ticket to happiness (or so I thought).

So I studied like I was possessed by study demons, reading my books for hours on end and rewriting my notes over and over again (note: these are totally ineffective ways of studying).

People had tried to get me to relax and not study so hard. My brother would say, “Sis, this isn’t a Nobel prize. Chill out!” but I had this goal and I wasn’t listening. So I continued to study. Non-stop. For hours on end.

Fast forward to the end of the year. It’s the final award ceremony. At this point, I’m feeling exhausted and burnt out after all the late nights I’ve been pulling to get my straight A’s. I’m waiting in anticipation to hear if I’ve won an award. My heart is beating so fast, it feels like it’s going to pop out of my chest.

Name after name is read out. I’m freaking out thinking:

“If I don’t get one of these awards, I don’t know what I’m going to do … all that work will have been for nothing!”

And that’s when I hear my name being read out. “Thank goodness. I got one!” I think, sighing with relief. Up I go to collect my award. I shake the principals hand, smile for a photo and then I sit down. And that’s it.

Now here’s what you need to know: I felt happy for about 3 minutes. And then I felt ‘meh’. Empty. Dissatisfied.

Let’s put all of this in perspective …

I had been miserable for most of the year, working like a machine to achieve my goal of getting straight A’s. And then once I received my award, I was happy for the grand total of 3 minutes.

Needless to say, that day I learnt a very important lesson.

I learnt the importance of focusing on the process (the journey). Not the end result.

A new approach to studying

In year 10, I decided to take a slightly different approach to my studies.

I remember working with two friends on a short film called ‘The Face’. We were so immersed in the script writing, acting, filming and editing that we forgot to eat. The only thing I had to eat all day was an icy pole. And I ate that quickly so we could get back to filming!

When we submitted the film to our English teacher, we couldn’t have cared less about what she thought. We’d had so much fun in the creative process and learnt a whole bunch of new skills. We were joking and quoting lines from the film for months afterwards.

Now here’s the thing: we got a great grade for that film. But the grade was an added bonus. Because what I remember more than anything, still to this day, is the fun and laughter my friends and I had. Not the grade.

If we had been paranoid about getting an A or the top mark, it would have interfered with our script writing and filming. Why? Because grade obsession fires up perfectionist tendencies.

When your inner perfectionist strikes it can be hard to make a start and really hard to finish your work because you’re always making the final touches. We wouldn’t have tried anything new and original because we would have been too scared to fail. Where’s the freedom and fun in that?

So I invite you to work as if your grades don’t matter.

Pretend that you’re either going to pass or fail. And even if you do happen to fail, imagine you have the opportunity to resubmit your work. This will give you a tremendous sense of freedom and it may also reboot your love of learning.